The Solomon Island Monetary Authority (SIMA) was created when National Parliament passed the SI Monetary Authority Ordinance in June 1976.  Before this, all the country’s currency requirements were handled by the Treasury Department at the Ministry of Finance, in conjunction with the Commonwealth Trading Bank of Australia.  Before moving into new premises at Rove in early 1977, the Authority operated from an office at the Ministry of Finance.

SIMA’s main functions were to administer the country’s currency and Exchange Control Regulations; but for its first year of operation, most of its efforts were directed toward the introduction of a currency that the Solomon Islands could call its own.

The Solomon Islands dollar was in fact launched in October 1977, allowing SIMA to focus on the administration of Exchange control Regulations on the government’s behalf. It held discrete responsibility for this from March 1977, with recruitment of dedicated staff beginning in February that year.

Introduction of the new currency brought further responsibilities, and over the next few years the Authority became heavily involved in converting Australian dollar 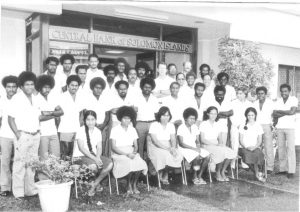 notes and coins to the new SI dollar, then shipping the Australian currency to Australia.

The first SIMA Board was appointed in 1976 by the then Minister of Finance, Mr. Benedict Kinika.  The first Board consisted of five Directors:

Inception of the Central Bank

In 1983, eight years after SIMA was inaugurated, an Act of Parliament converted SIMA to a Central Bank.  The Authority was then able to become involved in monetary policy.  Its principal objectives however remained unchanged.  Nevertheless, there were slight changes in how directors were appointed, and the new entity had increased powers, mainly in terms of determining interest rates, creating regulations and issuing currency.