We would describe the Solomon Islands as an ‘’open’’ economy because we are free to trade with other countries. But what are the benefits to the country of engaging in trade? We take a look at some of these benefits below.

The Benefits of Trade

The Solomon Islands enjoys numerous benefits by engaging in trade with other countries but the main benefits are:

We may have an ability to produce a certain good or service due to our environment, maybe our climate is good for growing coconut trees or we have access to natural resources like the sea and minerals beneath the ground that other countries do not have, this allows us to be able to produce some items more cheaply than other countries because we do not have to spend money accessing these resources.

By specialising in the production of specific goods and services companies in the Solomon Islands can increase their ability to produce these items. Not only will they be able to produce the items more easily, because they have gained experience at producing these items but also they will be able to produce them more cheaply as they can concentrate all their time and resources on the production of this one specific good or service. Because they are able to produce more efficiently and more cheaply, they are able to supply the domestic market with items at reduced prices which benefits consumers but also, if they are efficient enough and have enough resources they may sell their items abroad reaching more consumers and expanding their business.

By trading with other countries we are free to import and export goods and services. This is beneficial to most consumers because if domestically produced items are expensive we have the option to import cheaper alternatives. This represents competition for the domestic companies and can help to lower domestic prices in general.

The Solomon Islands is a small economy and if we did not trade at all we would have a very limited choice of goods and services. By trading with other countries we are able to greatly expand the choices that we have in terms of the goods and services that we can access. For example, if we were only able to buy food that was domestically produced we would find that some of the items that we like such as rice would not be readily available, we would have to increase our domestic production but because it would be on a small scale compared to production in other countries it would be more expensive than the rice we could have imported leading to high rice prices for the Solomon Islands.

Impacts of COVID-19 pandemic on our Trade

Now we look at the recent trade in the Solomon Islands and the impact on COVID-19 pandemic. The country exports round logs, canned tuna, cocoa, copra, coconut oil, alluvial gold, kava, and other marine products. We then import rice, flour, fuel, vehicle, building materials like cement, clothes and many things from overseas.

Table 1: Export and Import in millions of Solomon Islands dollars

The COVID-19 pandemic has taken a significant toll on external trade in the Solomon Islands economy. This largely due to the associated factors such as the restrictions and closures of international borders, delay in transportation of imported and exported goods, and the imposed state of emergency in the country. This shows a sizable contraction in both exports and imports for the year 2020 compared to 2019. Exports fell by 17% to $3,113 million, while imports dropped by 18% to $3,323 million (see table 1). 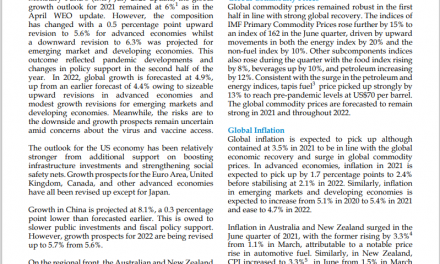